Home / Bringing Back Some Memories 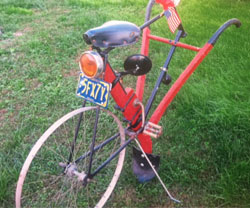 Recently I’ve been on a quest to reorganize and display goodies in my barn. While moving things around I ran into an item that brought back some great memories. This thing-a-magig belonged to Edgar Hoffeditz. Edgar & Betty and my family attended many engine shows together.

Usually, Edgar would display this bicycle, ride on, plow thing. Back then shows were smaller and you spoke to almost everyone who came by your display. People would be lined up to ask Edgar about this red thing with the seat. I remember laughing as he would tell an elderly lady some crazy story of what it was and how it was used for farming. She would walk away with her eyes spinning around like flying saucers. Usually it’s the craziest things that spark the greatest fun!

Sometimes I forget what this hobby is really about. It’s about having fun. Thanks to Edgar and Betty for the wonderful memories.

Written by Stephen, the old Historian for The Bridge