The Franklin Fall Farm Fun Fest was held September 26-28, 2019 at the host farm of Wayne and Bradley Beidel of Newburg, PA. CVAEMA once again sponsored the “Grinder Winder”, a learning station on the walking tour which consisted of 15 hand corn shellers provided by Bill Swailes.

Approximately 2,400 fourth graders passed through on Thursday and Friday, each able to hand grind an ear of corn after hearing an informative speech by Dale Happel. Dale interacted with the kids talking about corn and the products made from it.

Saturday it was open to the public and was another busy day. Good weather, help from Vo-Ag students, and help from club members helped to make this 29th annual event a success. 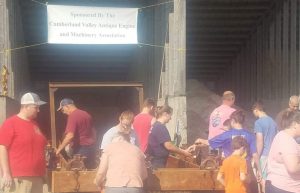 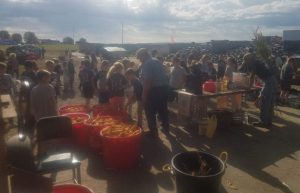 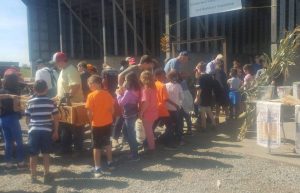 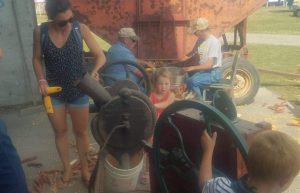 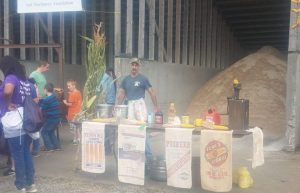 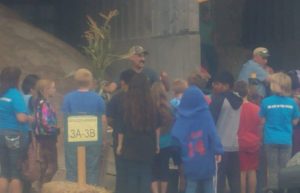 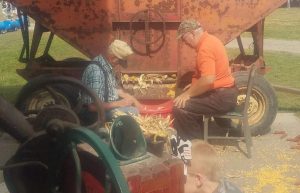 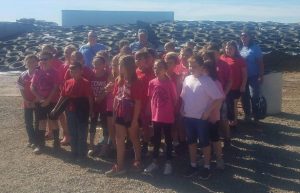 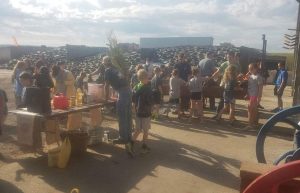 The 28th Franklin Fall Farm Fun Fest hosted by Robert Musser and his daughter Faith at the Musser Farm on Pinola Road, Shippensburg in September 2018.

The Cumberland Valley Antique Engine and Machinery Association had a learning station “Grinder Winder”. Dale Happel gave a presentation to each group explaining corn must be removed from the cob for the grain to be used for human food and products made with corn.

Bill Swailes brought his hand corn shellers which provided the children a hands-on demonstration, as each child and adult got to shell their own ear of corn under the watchful eye of volunteers from the club.

The corn was furnished by Franklin Feed. 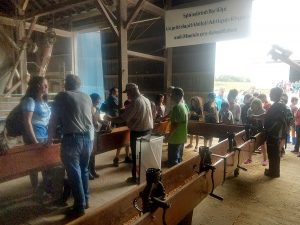 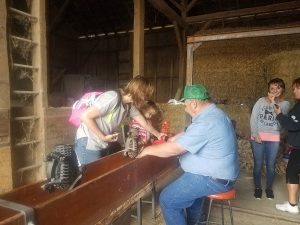 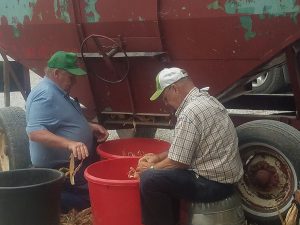 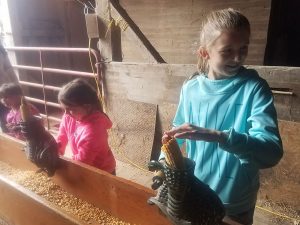 Recently I’ve been on a quest to reorganize and display goodies in my barn. While moving things around I ran into an item that brought back some great memories. This thing-a-magig belonged to Edgar Hoffeditz. Edgar & Betty and my family attended many engine shows together.

Usually, Edgar would display this bicycle, ride on, plow thing. Back then shows were smaller and you spoke to almost everyone who came by your display. People would be lined up to ask Edgar about this red thing with the seat. I remember laughing as he would tell an elderly lady some crazy story of what it was and how it was used for farming. She would walk away with her eyes spinning around like flying saucers. Usually it’s the craziest things that spark the greatest fun!

Sometimes I forget what this hobby is really about. It’s about having fun. Thanks to Edgar and Betty for the wonderful memories.

Written by Stephen, the old Historian for The Bridge

In our quest to preserve the agricultural history of the Cumberland Valley, it is easy to locate relics of our past and display them as they were used 100 years ago, we are blessed with a rich manufacturing history. The Frick and Geiser Companies come to mind locally, but there are many others within 100 miles of our show grounds that are also of importance. There are other important local agricultural contributions that are rather unknown to most folks. One of them, is soft red winter wheat variety discovered a few miles outside of Chambersburg in 1879.

In the early 1800’s, most of the wheat being grown was known as foundation breeds, these were wheat breeds that were brought here from other countries and were unaltered as far as hybridization or selective breeding was concerned. In our area, the soft red winter wheat of choice was often Mediterranean Wheat. As growers discovered unique plants in their fields that had desirable characteristics, they saved the seeds and if they were an improvement, they would often give them a new name.

In 1879, a local Greene Township farmer by the name of Mr. Henry Ebersole, who farmed 164 acres on two tracts (the farm is now part of the eastern side of Letterkenny Army Depot) was growing wheat and discovered a single wheat head that had no resemblance of the wheat that was being grown on his farm. He saved the seeds and began to propagate it. He began selling this wheat to his neighbors under the name of Franklin White Chaff, his patrons began to give it different names, often Franklin White Chaff was called “Franklin Prolific”, “Franklin Amber”, “Franklin” or “Ebersole”. It was all sold within 10 miles of his farm (Walsh)(S.P Bates).

In 1886, a seed wheat grower named Mr. S.M. Schindel from Hagerstown, Maryland bought 6000 bushel of Franklin White Chaff from Mr. Ebersole. Before Schindel sold this seed across the U.S, it was decided that a name change would better reflect its parentage and aid in marketing. Ebersole grew two wheat varieties on his farm, one was Lancaster (Mediterranean), and the other, Fultz (Walsh). Fultz was an improved beardless Lancaster (Mediterranean) wheat discovered in Allensville, PA by Abram Fultz in 1862. it was decided that this wheat should be renamed Fulcaster (Bayles, Clark 1949).

S.M Schindel was responsible for growing, advertising and marketing of Fulcaster across the U.S. and is often mistakenly credited with its creation(ARS). Fulcaster was a widely grown soft red winter wheat and saw soil in 25 different states. In 1919, Fulcaster was grown on 335,200 acres in Pennsylvania and was grown on 2,600,000 acres in the United States. Also in 1919, there were 39 synonyms (growers renamed Fulcaster without selecting for improvements, this was often done to reflect the area it was grown in and a marketing tool for seedsman) (Clark, Barr, Martin). Henry Ebersole would die in 1902 at the age of 78 and never fully see the success of his discovery. Henry is buried in the Chambersburg Mennonite Cemetery just north of Penn Hall. Fulcaster would eventually be replaced by newer, improved varieties and in 1959, only 59,000 acres were planted nationwide.

In the summer of 2015, I began searching for remnants of this local wheat. Our Government, surprisingly has been able to keep valuable germplasm of over 40,000 plants in various locations and much to my surprise, many of our regional wheat varieties were procured and saved. They are made available in small quantity by request. After requesting and securing a small amount of Fulcaster seed, we are in the process of increasing seed stock. The goal and dream is to grow enough Fulcaster wheat to be able to run it through a threshing machine. The revival of Fulcaster to the Chambersburg area is something everyone who values our agricultural past can look forward to. Fulcaster was one of the most important and widely grown soft red winter wheats of its time. I’m sure Mr. Ebersole would have never thought that a single wheat head would turn into 2.6 million acres.

Written by Jonathon Ott for The Bridge